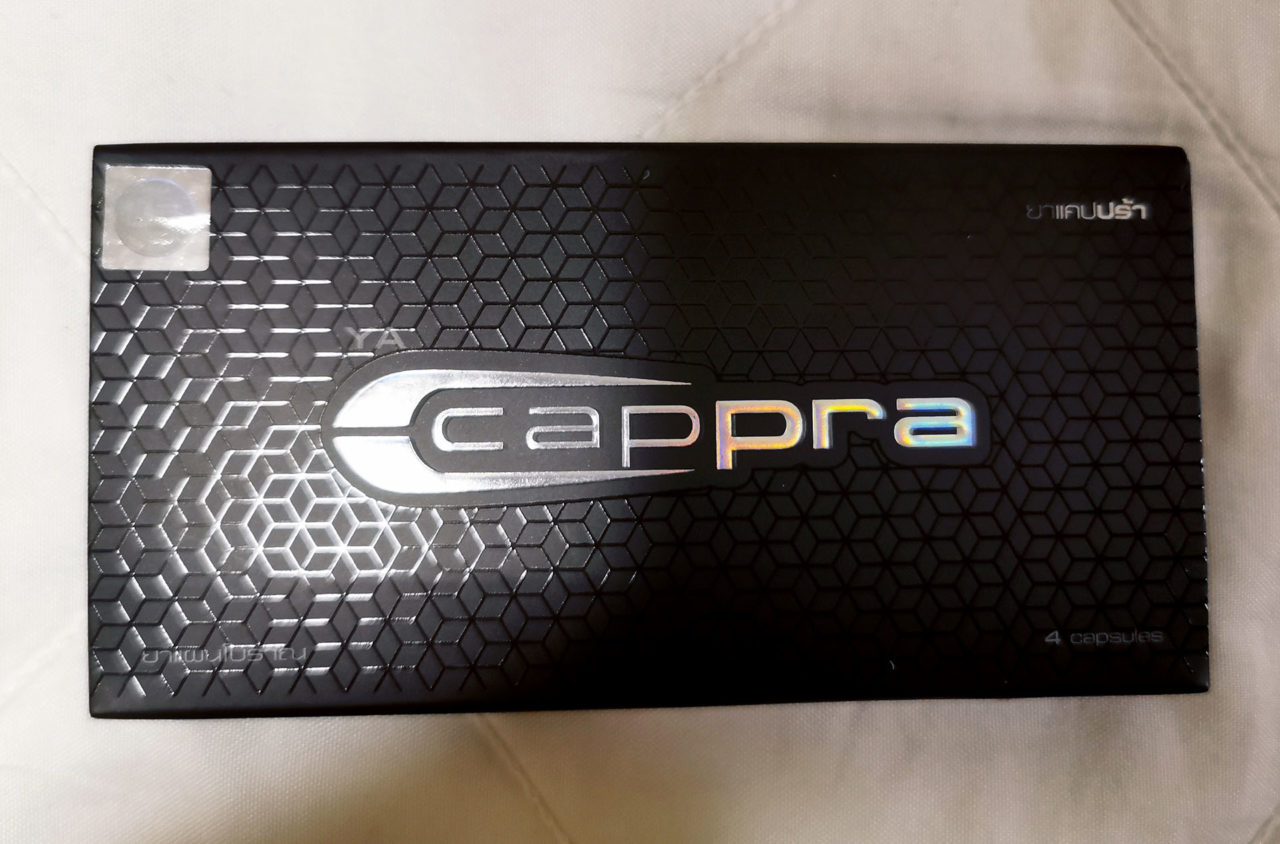 Your man is back! Thai Energizer made with natural ingredient 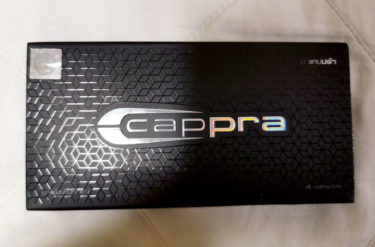 Living in Thailand, where the sex industry is well established and the nights are long, you can’t help but be aware of this.

I always feel uneasy in the corner of my mind, especially alcohol is always one set of drinks when I go out to play.

I’m a good old man myself, so I don’t feel quite as invincible as I did in my twenties.

However, I don’t want to use strong something yet and are concerned about side effects.

So my choice is something that is more than a supplement and less than a medicine, made only with natural ingredients.

This product was the No. 1 recommended energetic product in Japanese drugstores.

The product is not affected by alcohol consumption and is made from 100% premium herbs and is approved by the Thai FDA (Ministry of Health).

I saw the blog of that drugstore and bought it at that store.

I confirmed with the clerk that the product contained only natural ingredients, and the clerk himself had experienced the benefits of the product. 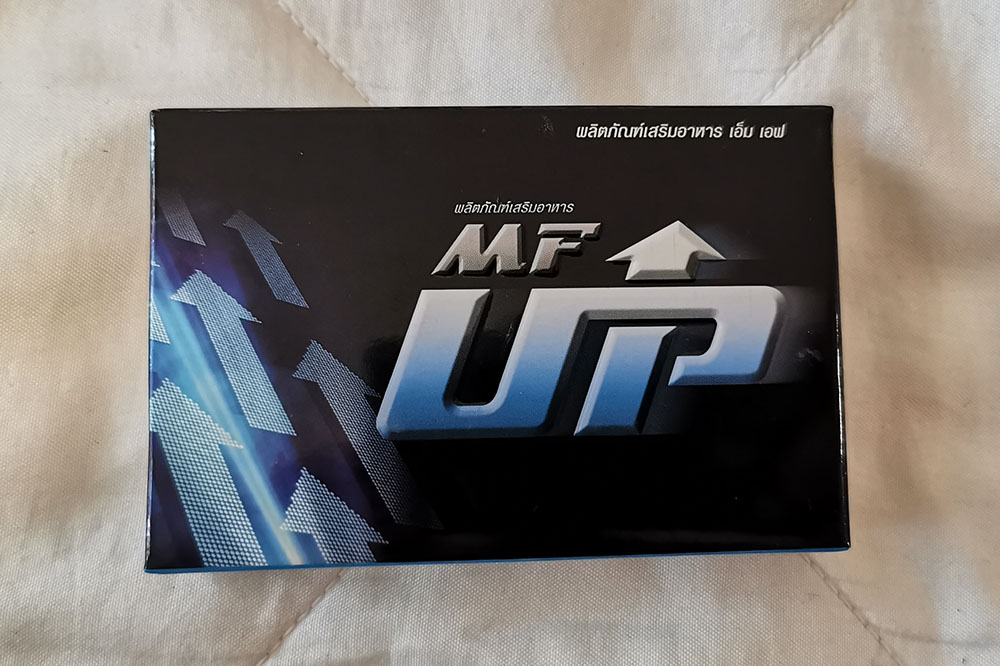 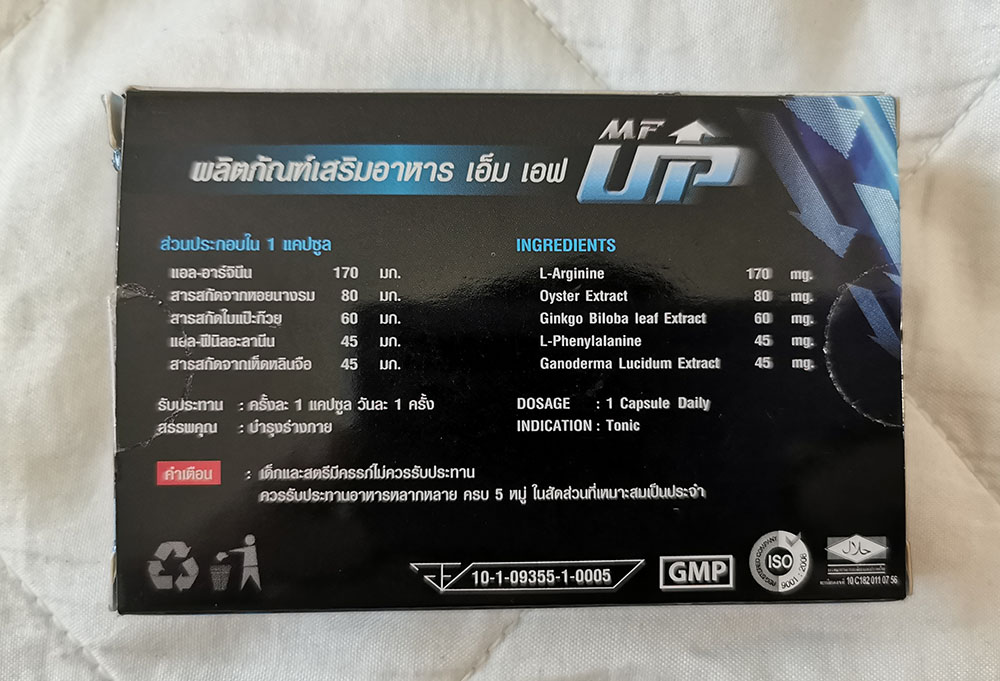 With the exception of Phenylalanine, the ingredients are all commonly found in supplements.

Frankly, I thought the price was too high for this ingredient, but I guess quantity is not everything, and I was stoked by the recommendation.

Phenylalanine seems to be this kind of thing according to wiki.

Phenylalanine is one of the essential amino acids and must be obtained as a nutrient from the diet. It is converted to tyrosine in the liver and creates excitatory neurotransmitters such as noradrenaline and dopamine. It has the effect of elevating the spirit, raising blood pressure, and enhancing memory. -from wikipedia

It is an ingredient also found in plants, so I think it is included as a plant-derived natural ingredient.

Effects and side effects of MF UP

As I was told that I would feel the effects within 30 minutes to an hour of taking it, I felt the change from about that time.

However, it seems that these supplements and medicine are only effective when feel aroused, so the first change I felt was the side effects.

I get a little lightheaded and a stuffy nose feeling.

I prepared something that seemed to excite me and tried it, and it worked, but only a fraction of what I had imagined.

I thought I would be able to go back to about my early 20s, but it was not enough at all.

It felt like that was being tightened and made unnaturally hard.

I can’t deny that the level of excitement is a bit lacking, so this point can only be improved in the original situation.

If only for that, I thought it was a good product to carry as insurance, but from there the side effects increased and I fell asleep for an hour.

However, it is long lasting, and the tightening tension lasts until the next day.

I thought I could feel the effect for not being a medicine, but the side effects change the color I see.

The color temperature seems to have changed, with fluorescent lights appearing whiter and blues more vivid.

Questions I had about MF UP

‘Why are there side effects which it’s a natural ingredient?’

When I told people who have taken medicine such as Viagra about this symptom, they said it was similar to the side effects of such medicines.

I don’t know if this means that chemical ingredients are actually in it, but the Japanese Ministry of Health, Labor and Welfare’s survey of supplements and other imported products found ingredients from “MF UP” that are used in the ED medine Synadelphil.

The product appears to be approved by the Thai FDA (Ministry of Health), but I don’t know the criteria for approval, so I can’t say anything about this point.

It is hard to imagine that they would make a fake MF UP and go to the trouble of adding cinadelfil.But I am sure it is not just natural ingredients.

This is another popular product in Thailand. It is said to be famous as an energetic herb popular among wealthy people in Thailand. 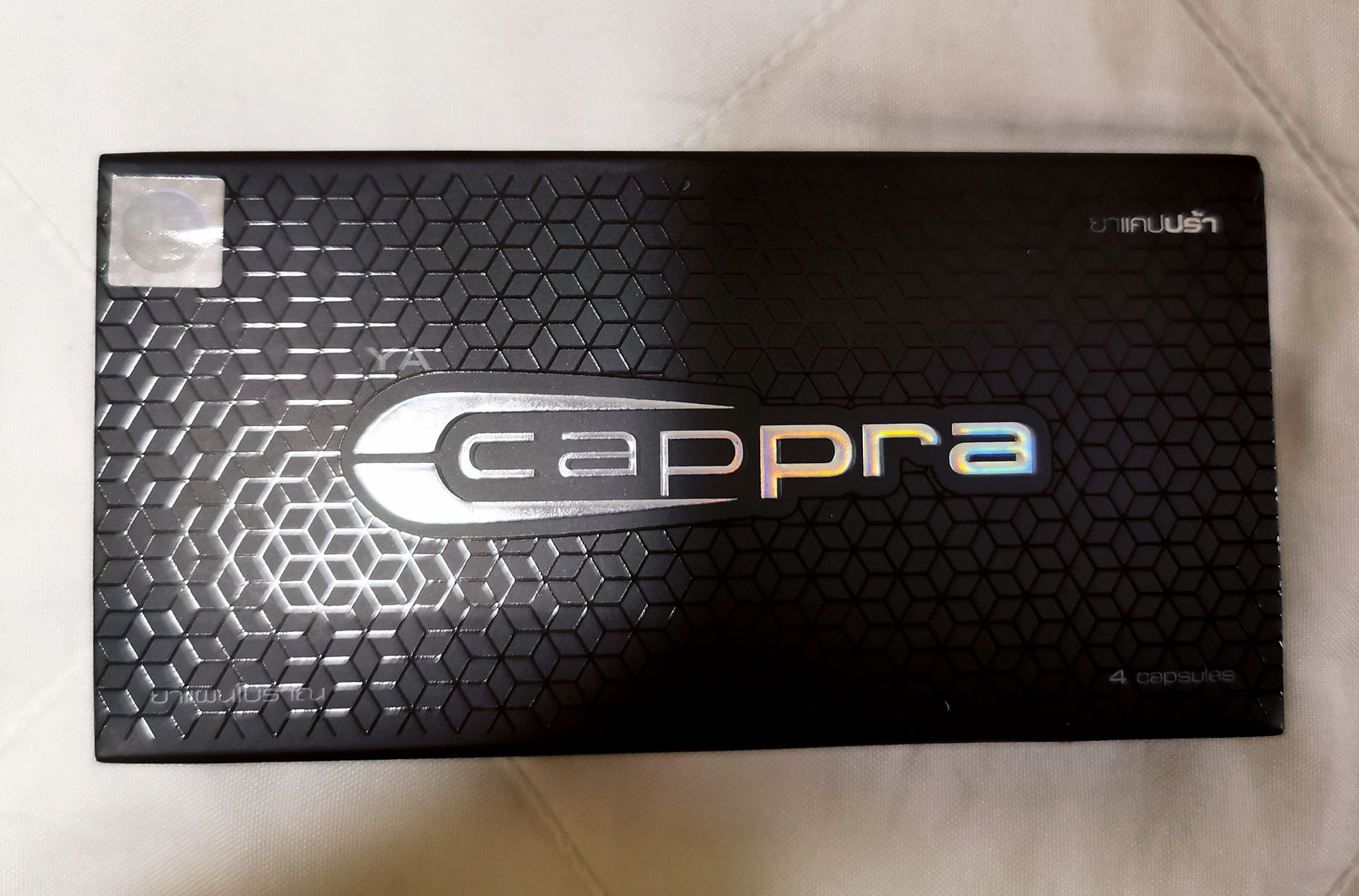 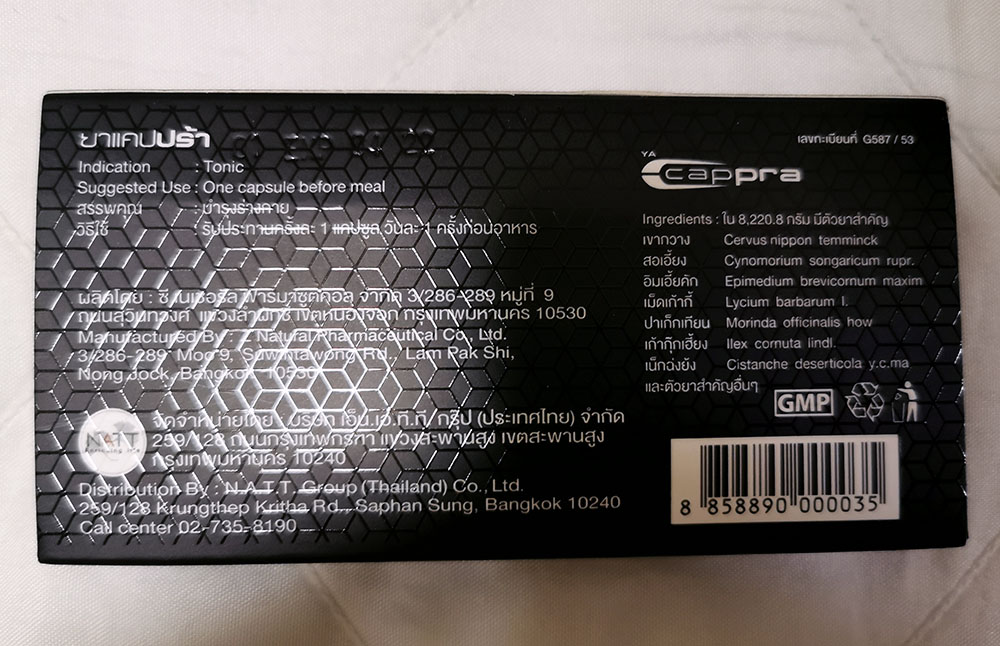 The price is high, and so are the plants. The plants are all unfamiliar to me.

The natural ingredients in MF UP are all common, so this seems promising.

Effects and Side Effects of CAPPRA

Side effects were described in the instructions.

Side effects such as headache, blushing, hot flashes, and runny nose are often observed, he said. 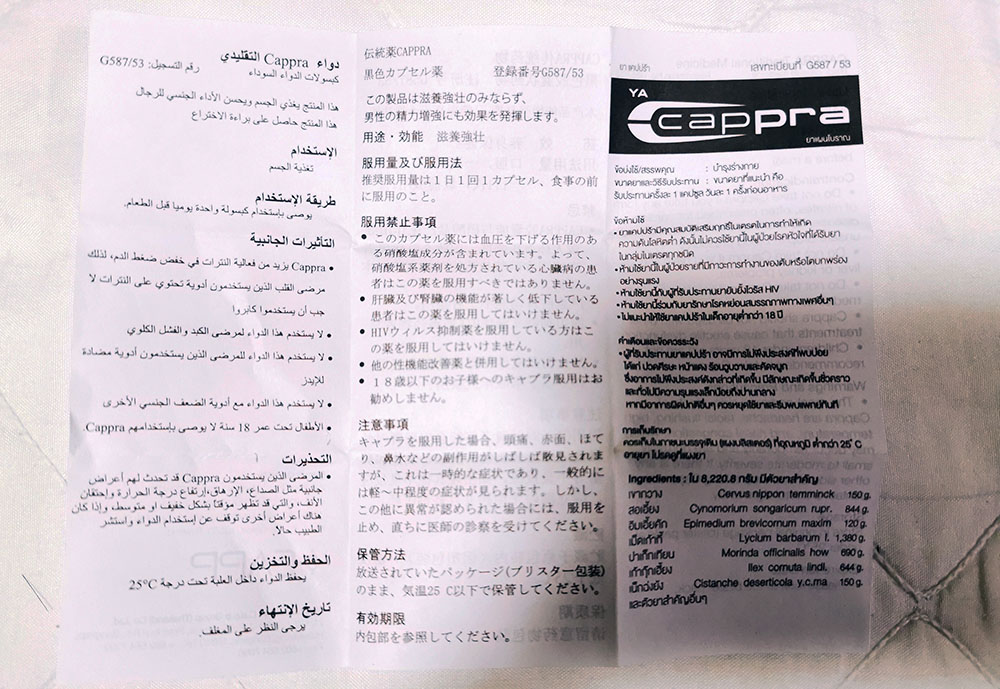 The actual side effects were similar to MF UP.My head feels a little foggy and my nose feels stuffy.

This one also sleeps for about an hour, the color temperature changes, the fluorescent light looks whiter and the blue looks brighter.

The effect is similar to MF UP, and the tension lasts as if that thing was tightened.

It may be a difference due to my physical condition, but this product was more agonizing and the tension was stronger the next day.

Furthermore, this product has also been checked by the Japanese Ministry of Health, Labor and Welfare for imports and has been found to contain the ED drug cinadelphyll (though to a lesser extent than MF UP).

The herbs used are completely different, but both effects and side effects are about the same.

In other words, the effects and side effects due to ingredients other than those listed (cinadelphyll) are so strong that they may remain generally the same (this is just a guess).

As for the herbal ingredients, I think CAPPRA is superior, which means that it has a longer lasting agony and tension.

As for how practical it is, the side effects do not co-exist with pain, but it is hard to stay awake with my head in a daze, so how much can I get myself worked up in front of a woman?

I think it will depend on this.

But me, I don’t think I can do it. I’m going to fall asleep.

So I will be diligent in maintaining my strong vigor with general supplements and exercise.

(Update) I got used to the side effects after using it a few times.

Unfortunately, I never used it in front of women, but afterwards as an energizer, I took the purchased dose occasionally, and my body became accustomed to the side effects.

I’m worried that I’ll get used to the effectiveness of this one, but I can’t tell much difference because that one hasn’t shown any real power.

At least I have gotten a little used to the side effects and no longer sleep.

Of course, I have no intention of using it on a regular basis, but this makes me think that I would be willing to purchase it again.

*The effects and side effects are only examples of individual cases and should be judged on an individual basis.